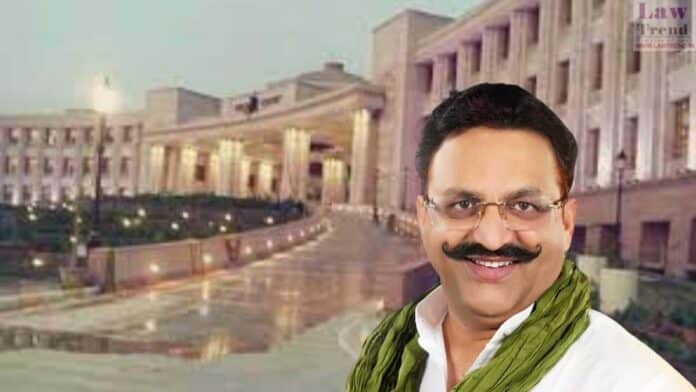 On September 21, the Allahabad High Court at Lucknow convicted and sentenced former MLA Mukhtar Ansari to seven years in prison for threatening a jailer and pointing a pistol at him.

In 2003, Lucknow district prison jailer SK Awasthi filed a FIR with Alambagh police, alleging that he was threatened for ordering a search of visitors to Ansari’s prison.

The former BSP MLA was also accused of threatening Awasthi with a pistol while abusing him. Ansari was acquitted by the trial court, but the government filed an Appeal.

Mr. U.C. Verma, Additional Government Advocate appearing for the State-appellant assisted by Mr.Rao Narendra Singh, A.G.A. submitted that place of incident, presence of the complainant and witnesses are not in dispute. Alleged incident had taken place inside the jail. The accused-respondent is biggest bahubali of the State, facing several dozens of cases of heinous offences. Accused- respondent’s name strikes fear and terror in the hearts and minds of general public, and even in the Government officials. Mr.R.K. Tiwari earlier Jailer was killed in a cold blooded manner in a broad day light near Governor House, Lucknow allegedly on behest of the accused- respondent and other accused as he was enforcing the rules and regulation of jail which was causing hindrance in carrying out illegal and criminal activities of the accused-respondent from Jail in organized manner. These accused, however, could secure acquittal as witnesses turned hostile which is a pattern in all cases where the accused- respondent had secured acquittal.

On the other hand, Mr. Jyotindra Mishra, Senior Advocate assisted by Mr. Satendra Kumar (Singh), Advocate appearing for the accused-respondent has submitted that evidence of none of the witnesses is cogent and credible.

It can be seen that law is very clear that appellant court lightly should not interfere with the judgment and order of acquittal unless the said judgment is perverse or the view taken by the learned Trial Court is impossible view. It is also well settled that testimony of hostile witness does not get effaced completely and washed off record but it is for the Court to closely scrutinize the testimony of such witness in the facts and circumstances of the cases and take into consideration while convicting or acquitting the accused that part of the testimony of such witness which supports the prosecution case and can be relied on for convicting the accused.

Ansari is currently being held in Banda jail after being transferred from a Punjab jail on the 7th of April pursuant to a Supreme Court order.

Ansari is on trial in a number of cases. He has been imprisoned in Rupnagar since January 2019 in connection with an extortion case, and he is facing 52 cases in UP and elsewhere, 15 of which are in the trial stage.

Unable to Livestream Court Proceedings Without Use of Third-party Apps: Supreme Court Registry