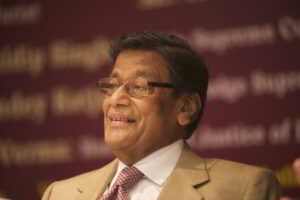 Attorney General of India, Shri K.K.Venugopal refuses to give consent for initiation of proceedings of criminal contempt under section 15 of the contempt of courts Act 1971 against Journalist, Rajdeep Sardesai.

Shri Om Prakash Parihar, made an application before the attorney general of India seeking permission to initiate action by way of criminal contempt against the Journalist, Rajdeep Sardesai. It was alleged that 5 tweets made by Rajdeep Sardesai in connection with contempt proceedings of Prashant Bhushan are contemptuous.

A.G. mentioned in his letter that the statements made by Sri Sardesai are not of serious nature as to undermine the majesty of the Supreme Court or lower its stature in the minds of public.

He further added that the reputation of the Supreme Court as one of the greatest pillars of our democracy has been built assiduously over the last 70 years. Trifling remarks and mere passing criticism though perhaps distasteful are unlikely to tarnish the image of Institution.

In view of above AG declined to give permission to initiate criminal contempt proceedings.