What is the Difference Between Vakalatnama, Power of Attorney and Memo of Appearance?- Know Here 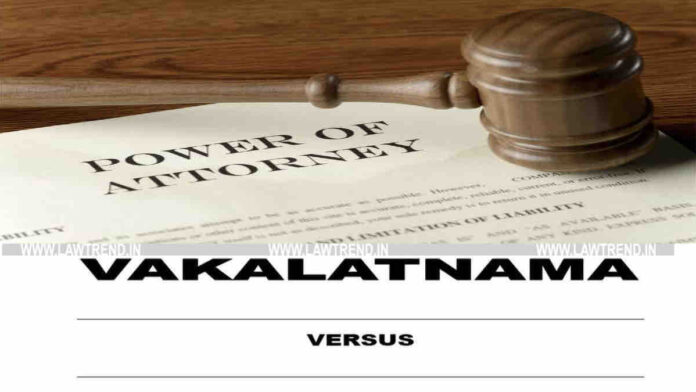 In day to day proceedings of Court terms like Vakalatnama, Memo of Appearance and Power of Attorney are very frequently used.

In fact these three terms are used for each other, as if they are same. However there is difference between Vakalatnama, Memo of Appearance and Power of Attorney.

As per Advance Law Lexicon Vakalatnama includes memorandum of appearance or any other document by which an advocate is empowered to appear or plead before any court, tribunal or other authority.

A Vakalatnama is a document that authorises a lawyer to act on behalf of his client. A Vakalatnama under which a lawyer is empowered to act may be general or specific in nature.

What is the Power of Attorney?

Section 1A – Definition in The Power of Attorney Act, 1882, includes any instrumentals empowering a specified person to act for and in the name of the person executing it.

Osborn’s Concise Law Dictionary, a ‘Power- of – Attorney’ means a formal instrument by which one person empowers another to represent him, or act in his stead, for certain purpose, usually in the form of a deed poll, and attest by two witnesses. The donor of the power is called the principal or constituent; the donee is called the attorney. The latter is not entitled to exercise his powers for this own benefit, e.g. draw cheques on the former’s account to pay his own debts.

Stroud’s judicial Dictionary a ‘Power-of- Attorney’ is an authority whereby on is ‘said in turn, stead, or place of another’ to act for him.

Here are the relevant provisions carving difference between Vakalatnama, Memo of Appearance and Power of Attorney:

CPC Order 3 Rule 4(1): Appointment of pleader: No pleader shall act for any person in any Court, unless he has been appointed for the purpose by such person by a document in writing signed by such person or by his recognized agent or by some other person duly authorized by or under a power-of-attorney to make such appointment.

CPC Order 3 Rule 4(5): MEMORANDUM OF APPEARANCE: That the advocate/ counsel, who has been engaged for the purpose of “pleading only” shall plead on behalf of any party, unless he has filed in Court a memorandum of appearance signed by himself and stating-

(a) the names of the parties to the suit,

(b) the name of the party for whom he appears, and

This is a physical/ written document signed by undersigned parties, which states that the respective parties/clients have given the authority to his advocate/counsel on his/their behalf to appear, plead and act for the case which pending/file etc before the court or to received any process of court. This is an authoritative document which has to be submitted to the court.

Matrimonial Dispute: Criminal Proceedings Inter Se Parties Can be Quashed Under Artice 142 or Sec 482 CrPC If parties Have Genuinely Settled Their Dispute,...