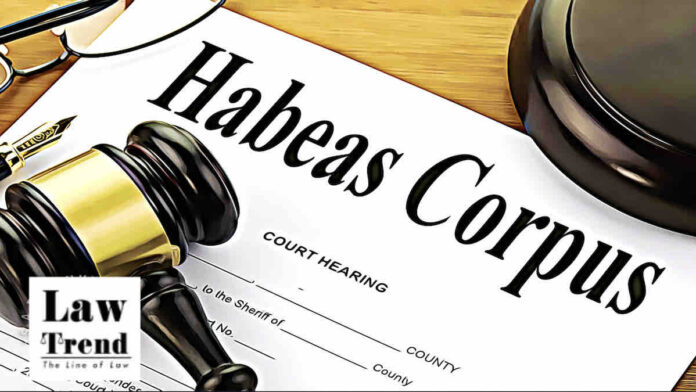 The term ‘Habeas Corpus’ comes from the Latin words habeas and corpus. Habeas means ‘to have something’ and Corpus means ‘body’. Thus the literal meaning of the term is ‘to have the body.’

If the cause given reveals that the detained person has been detained illegally, the Court will order his release. Thus, the primary goal of the writ is to provide an instant remedy to a person who has been wrongfully held by the person, whether in prison or private custody.

In Kanu Sanyal vs. District Magistrate, Darjeeling, the Supreme Court ruled that when dealing with an application for writ of habeas corpus, the body of the person alleged to be unlawfully incarcerated was not required. In that instance, Kanu Sanyal, a top-ranking Naxalite leader, was caught in 1971 and imprisoned without charge in the Vishakhapatnam Jail.

He approached the Supreme Court for a writ under Article 32, disputing the validity of his incarceration and requesting that the Court issue an order requiring his appearance in court. The Court ordered the rule nisi but did not order the detenue to be produced. Justice Bhagwati ruled that in a writ of habeas corpus under article 32, the body of the person detained before the court was not required for the court to hear and decide the writ petition.

Who can apply for the writ of habeas corpus?

An application can be made by someone who is illegally held, according to the general norm. However, in some circumstances, any anyone may file a habeas corpus petition on behalf of a prisoner. The individual could be anyone, such as a friend or relative.

The Supreme Court does in the application of writ of habeas corpus does not follow a strict rule of pleading nor place undue emphasis as to question as to on whom the burden of proof lies. Even a postcard written by a detenue from jail would be sufficient to activate the Court into examining the legality of detention.

The Supreme Court has historically demonstrated tremendous concern for personal liberty, refusing to dismiss a petition just because it lacks a prima facie case. This practice marks a departure from that that obtaining in England where observance of the strict rules of pleading conditions prevailing in this country the Court has adopted a liberal approach.

The burden of proof to justify that the detention is legal has always been placed on the authority detaining the person.

Technicalities and legal necessities are no impediments to the court entertaining even an informal communication as a proceeding for habeas corpus if the basic facts are found.

The writ of habeas corpus will not only be used to release an unjustly detained person, but it will also be used to protect him against treatment inside cells. After Batra’s Case, the dynamic role of judicial remedies imparts to the habeas corpus writ a versatile vitality and operational use that makes the healing presence of the law live up to its reputation as a bastion of liberty even within jails declared, said Justice Krishna Iyer.

The plea of absence of independent consideration was not raised in the petition nor urged before the High Court. It was not even raised in the appeal to the Supreme Court. The Supreme Court allowed the counsel to canvass this point and held that ordinarily, it would have not allowed raising any point in the Court which was not urged before the High Court but the habeas corpus petition could not be dismissed on the ground of imperfect pleading.

When the habeas corpus petition can be considered?

Conditions to prove that detention is illegal:

a)   If the detention is not made in accordance with the procedure established by law.

b)  The detention violates conditions mentioned under Article 22.

c) If the person who is arrested is not produced before the Magistrate within 24hrs of his arrest.

If any of the conditions are satisfied, then the detention/arrest will be illegal and the arrested person will be entitled to be released on a writ of Habeas Corpus.

How to file a habeas corpus writ petition:

The writ of habeas corpus can be filed in the High Court (Article 226) or Supreme Court (Article 32).  Upon filing a habeas corpus writ petition the Court calls upon the detained person before it to examine whether he has been illegally detained. After examining if the court thinks that the person has been illegally detained or arrested, the Court can order to release the person under the Habeas Corpus writ petition.

This is the only body of the Writ Petition. Please include other details also, as per the requirement of concerned High Court and Supreme Court Rules:

IN THE HIGH COURT OF BOMBAY

(UNDER ARTICLE 226 OF THE CONSTITUTION OF INDIA)

IN THE MATTER OF:

WRIT PETITION UNDER ARTICLE 226 OF THE CONSTITUTION OF INDIA PRAYING INTER ALIA FOR ISSUING WRIT OF HABEAS CORPUS TO RESPONDENT NO. 1, 2 AND 3 THEREBY QUASHING THE IMPUGNED ORDER AND DIRECTING THE RELEASE OF THE PETITIONER AND GRANTING REASONABLE COMPENSATION TO THE PETITIONER

And His Companion Judges of the

The humble petition of the

1. That the Petitioner is filing the present writ petition under article 226 of the constitution of India praying inter alia for issuing writ of habeas corpus to respondent no. 1, 2 and 3 thereby quashing the impugned order and directing the release of the petitioner and granting reasonable compensation to the petitioner.

4. That, on the date of getting detained and arrested in the Tihar Jail. The Petitioner was not informed about the grounds of his detention by Respondent No. 3.

5. That after Ten days of getting arrested and detained, the Petitioner was informed of his ground of arrest and detention.

7. The Petitioner’s father is interested in the release of the Petitioner from the detention.

8. That the Petitioners have no other efficacious remedy except to approach this Hon’ble Court by way of this Petition under Article 226 of the Constitution of India.

9. That the Petitioners have not filed any other petition or preceding in any court or tribunal throughout the territory of India regarding the matter.

10. Therefore, the order by Respondent No. 1 dated______, is illegal, arbitrary and with lack of jurisdiction because of the following grounds given below:-

That the present Writ Petition is being filed on the following, amongst other, grounds without prejudice to each other;

a. Because the grounds of detention were furnished to the Petitioner after prolonged delay.

b. Because the Petitioner’s detention is violative of Article 21 of the Indian Constitution.

d. Because he grounds of detention is very arbitrary and vague.

In view of the facts & circumstances stated above, it is most respectfully prayed that this Hon’ble Court may be pleased to:-

a) Issue a Writ of Habeas Corpus to the Respondent 1 to 3 thereby quashing the impugned order;

b) Issue an appropriate Writ Directing release of the Petitioner;

d) Any other relief, order or direction this court may deem fit and proper under the facts and circumstances of this case.

AND FOR THIS ACT OF KINDNESS THE APPLICANT AS IN DUTY BOUND SHALL EVER PRAY.

ADVOCATE FOR THE PETITIONER

OTHER INFORMATION, DOCUMENTS TO BE INCLUDED WITH WRIT PETITION

7. Annexure to the Petition

9. Vakalatnama on behalf of the petitioner.