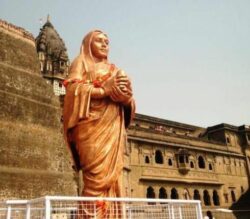 Anguished times call for desperate measures. The adult comedy, web series “Virgin Bhaskar season 2” casting Anant Joshi and Rut Panna Aishwarya was released on 29.08.20. It has highly been condemned, and a practising advocate, Mr Krishan Kanhya Pal, has filed a Public Interest Litigation before the Lucknow High Court for using the name of the Girls hostel as “Ahilyabai Girls Hostel.”

Directed by Sakshat Dalvi and Sangeeta Rao, the season 2 of Virgin Bhaskar series was released on 29.08.20 on ALT Balaji and Zee-5. ALT Balaji is an Indian subscription owned subsidiary of Balaji Telefilms Ltd, launched on 16.07.2017, headquarters at Mumbai. On the other hand, Zee-5 is an Indian video-on-demand service run by Essel group via its subsidiary zee entertainment enterprises, launched on 14.02.2018, headquarters at Mumbai.

Regressing to history, the name ‘Ahilyabai’ is in acquaintance to Devi/Maharani Ahilyabai Holkar. Devi/ Maharani was the noble Sardar of the Maratha Empire. Devi Ahilyabai was born in Chandi village, Jakhed Ahmed Nagar, Maharashtra.

The Queen of Malwa ‘Ahilyabai’, apart from being a brave queen and proficient ruler, was also an erudite politician. Thirty years of her rule flourished a tiny village into a city in Indore. Maheshwar, her capital, is an epitome of literary, musical, artistic and industrial achievements.

Historians write, the Queen invigorated all in her dominion and her kingdom to perpetrate the best.

“Far and wide the roads were planted with shady trees, and wells were made, and rest-houses for travellers. The poor, the homeless, the orphaned were all helped according to their needs. The Bhils, who had long been the torment of all caravans, were routed from their mountain fastnesses and persuaded to settle down as honest farmers. Hindu and Musalman alike revered the famous Queen and prayed for her long life,” writes Annie Besant.

“Indore long mourned its noble Queen, happy had been her reign, and her memory is cherished with deep reverence unto this day,” writes Besant.

PIL says that citing the use of the name ‘Ahilyabai’ as the girl’s hostel name in the series has hurt the sentiments of people at large mostly people belonging to Hindu religion and Shepherd community due to the highly obnoxious and scandalous use of the same name.

The Petitioner has impleaded following as Respondents:

The Prayers made in the PIL are:

Considering the same issue Dr Vikas Mahatme, Member of Parliament (Rajyasabha) has also sent a letter on 06.09.2020 to the Minister of Information and Broadcasting, Shiri Prakash Keshav Javedkar expressing the stance of distress and religious sentiments being hurt of the worshippers of Devi/Maharani Ahilyabai.

He also pretended that the girl’s hostel scene involves a sex scandal and this is extremely sloshing and stinging for the viewers to witness such an inevitable hurt of the public at large. He proceeds his request to be considered with utmost sincerity and immediate effect.

Through various platforms, it is reported that the use of sex and vacuous language is a decoy to captivate the audience at large. There have been many controversies that took a front seat regarding the content being shown on the digital platforms. In the past years, numerous legal complaints have been made in response to the mordacity and pungency that is created on the viewers.

On the contrary, it is also thought that censoring or filtering the content would curb the freedom and creativity of the creators. In the end, individuals and audience are responsible for comprehending the delivered message in the apt conduct. Time and again these kinds of issues have been raised before the Courts, and the Courts have always tried to harmoniusly balance between the freedom of expression and religious sentiments.

READ PETITION AND LETTER OF M.P.