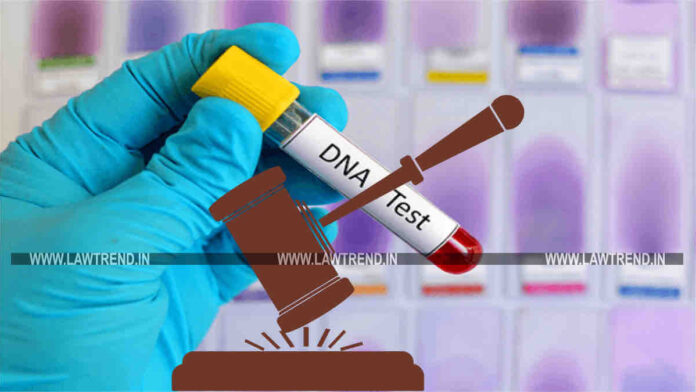 The Allahabad HC on Saturday ruled that DNA test is not to be directed as a matter of routine and in only deserving cases where a strong prima facie case is made out.

The bench of Justice Gautam Chowdhary was dealing with the petition challenging the order dated passed by the learned Additional District Judge, in a case filed under Section 302 I.P.C.

In this case, FIR was lodged by Hardeo Singh that Mohan Singh (applicant) abused and shot his mother.

The accused moved an application under Section 233 Cr.P.C. stating therein that the prosecution may be directed to provide the blood sample of the family members of the victim and be sent to a Forensic Laboratory for conducting the DNA test of the blood collected from earth to ensure whether both are same or not. The said application has been rejected.

Sri Gaurav Kakkar, Counsel for the applicant submitted that, although the DNA test cannot be conducted where there is a violation of the right to life, or privacy of a person and the same should be exercised after weighing all pros and cons and satisfying that the test is of eminent need.

It was further argued that in the instant case violation of the right to life or any stigma would be put on the privacy of the family members of the deceased and therefore there is an eminent need for a DNA test to prove the innocence of the applicant.

The issue for consideration before the bench were:

Whether the scientific knowledge to unearth the truth can be used? Secondly, what would be the effect in case, DNA is directed to be conducted, thirdly whether the right to life or privacy of the informant can be violated?

While dealing with the first issue High Court stated that the rejection of the application for a DNA test and granted an opportunity to adduce documentary or oral evidence in respect of his innocence by the court below is nothing but an old-aged practice in spite of the availability of scientific methods available before it and therefore scientific method must be used to unearth the truth because justice is best served by truth.

While dealing with the second issue the bench opined that “In case, the DNA is directed to be conducted and DNA matched, then the accused may be convicted. In case, DNA does not match, then to arrive at a just and fair decision of the case, following the settled and basic principles that no innocent be convicted else, ten culprits are left free. The contention that the applicant is innocent would be proved if the DNA samples are not matched and he is being falsely roped in the present case.”

While answering the third question the High Court stated that the DNA test has not been asked to be conducted to establish the relationship between the applicant and informant rather the same has been requested to prove the innocence of the applicant, therefore, there would no impinge on his personal liberty and his right to privacy of the informant or his family members.

The bench opined that “DNA test is not to be directed as a matter of routine and in only deserving cases where strong prima facie case is made out, the such direction may be given. Since the life of the applicant is at stake as he is accused of an offence under Section 302 IPC, it is must to ascertain and test the truthfulness of the prosecution case.”

In view of the above, The High Court set aside the impugned order and stated that it would be in the interest of justice that a DNA test may be conducted.

Case Title: Mohan Singh v. the State of U.P. and Another

Fixed Term Sentence Exceeding 14 Years Can Be An Alternative To Death Sentence In Some Cases, Says Supreme Court

JJ Act | Radiological Age Test Can be Ordered When There is Contradiction in School Leaving Certificate and Other Evidence Regarding Age: Allahabad HC

Instructions in Advertisement Must be Followed by Candidates; Interference Will Open Pandora’s Box- Allahabad HC