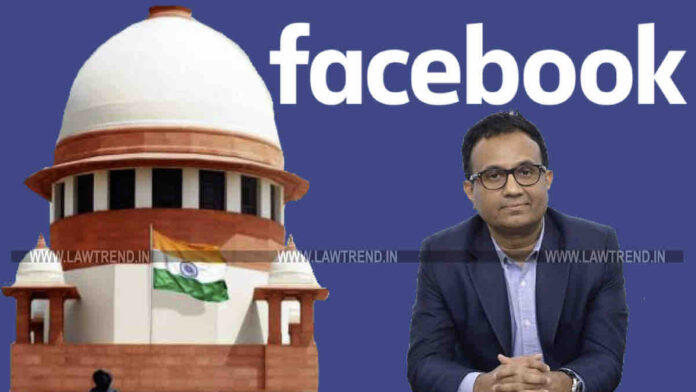 The Supreme Court gave its decision on Thursday in response to a petition filed by Facebook India Vice President Ajit Mohan and others challenging the summons issued by the Delhi Assembly’s Committee.

The Supreme Court has observed that social media platforms with the ability and potential to influence individuals across borders, such as Facebook, and debates and posts on these platforms have the potential to polarise society because many members of society lack the means to verify the authenticity of the information.

Further, the bench of Justice SK Kaula has expressed its displeasure with the statement given by the chairman of the peace and harmony committee, Raghav Chaddha, even before the assembly panel heard Facebook.

The Court has observed that the Assembly peace and harmony committee would have no jurisdiction over subjects reserved for the Union government, such as law and order in Delhi.

If a Facebook official decides to testify before the Committee, he cannot be forced to answer questions, and the committee cannot proceed against him in violation of House privilege.

As such the crux of the Supreme Court’s decision, in this case, is that while Facebook must come before the peace and harmony committee, it cannot be compelled to answer questions about law and order, communication, or any other matter under the Union Government’s purview

The committee had summoned these people for failing to appear as witnesses in the incidents of riots in North-East Delhi.

The judgment was delivered by a bench of Justices Sanjay Kishan Kaul, Dinesh Maheshwari, and Hrishikesh Roy.

Mohan’s counsel argued in the Supreme Court that the “right to remain silent” is a virtue in today’s “noisy times.”

Senior counsel Harish Salve, appearing for the Facebook official, argued that forming a peace committee is not a huge assignment for the Delhi Assembly because law and order issues in the national capital are under the jurisdiction of the Center.

Simultaneously, senior counsel AM Singhvi, appearing for the committee, stated that the assembly had the authority to issue the summons.

In early December of last year, the committee intervened before the Supreme Court in a case by Mohan and others.