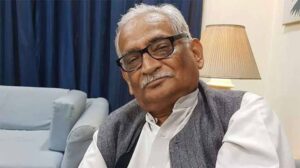 A Petition is fil in Supreme Court by Mr. Rashid Khan Pathan, claiming himself to be human right activist.

The petitioner states that he came across a video on the verified Twitter handle of Utkarsh Anand, Legal Editor @ CNNnews18.

during virtual court proceedings in respect of disqualification of 6 BSP MLAs.

The Grounds of Petition are:

The act of smoking was an outright affront within the meaning of Section -2 (c) of the Contempt of Courts Act r/w the Bar Council Rules,

as to Advocates Code of Conduct. Conduct of Adv. Dhawan certainly was disgraceful in soiling the hallowed gown of Senior Counsel.

Under Rule 1 & 2 of Bar Council of India, Code of Conduct Rules, enjoins an advocate to act in a dignified manner before a Court & with self-respect.

The term Court certainly includes a virtual Court; and the adherence to dignified conduct is a ‘must’ without any known exception for a designated senior advocate.

The case of the petitioner is that ‘Senior Advocate’ is conferred designation as an acknowledgement for their knowledge and upright conduct,

to serve as role models for the profession – respondent-1 a designated senior advocate denigrated the dignity of this Hon’ble Court and its Judges with impunity,

such persons ought not to be permitted to continue with the respectable designation/ regalia, of ‘Senior Advocate’.

This Petition can also be construed as information to initiate contempt proceedings against Sr. Adv. Rajeev Dhawan.

as to why they are not being allotted political sensitive cases (Sh. Dave) or smoking (Sh. Dhawan) in a virtual courtroom during the

course of proceedings which has sullied the majesty of this court to it’s perigee, which ought not to go unpunished. As a measure of

equality before law; it is axiomatic to say, any other lawyer – had he conducted with such brazenness wouldn’t and shouldn’t have

been spared of any leniency, the petitioner entreats this Hon’ble Court to apply the same standards of punitive/disciplinary action

against Sh. Rajeev Dhawan, as would have visited any other not so famed lawyer.

to issue such appropriate writ or directions to the effect:

A. In recalling the senior advocate designation of Advocate Rajeev

B. Any other appropriate relief as may be deemed given the facts and circumstances of the present case,

including passing appropriate directions to Respondent-2.