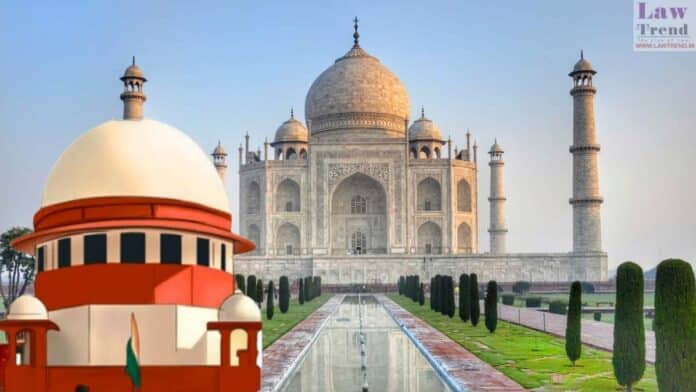 The Supreme Court has directed the Agra Development Authority that no commercial activity should take place within 500 metres of the Taj Mahal’s boundary wall.

All commercial establishments and shops in this area should be demolished. As a Amicus, senior advocate ADN Rao has submitted his report to a division bench of Justices Sanjay Kishan Kaul and Abhay S. Oka.

All commercial activities around the Taj Mahal will be halted, according to the report’s guidelines. This monument is designated as a UNESCO World Heritage Site. A similar order was issued in May of 2000, according to the Supreme Court. However, it would be appropriate to issue the same order again, and the Agra Development Authority agreed.

According to the order, all shops and business establishments within a 500-meter radius of the Taj Mahal monument’s boundary wall and its adjoining walls will be closed. The Supreme Court issued this order in response to a petition filed by a group of shopkeepers.

Outside of a 500-meter radius, shops have been assigned to shopkeepers, according to the order. According to the shopkeepers’ counsel, the illegal business activities near the Taj Mahal’s western gate violated the court order.

Share
Facebook
WhatsApp
Twitter
Print
Pinterest
Previous articleInstructions in Advertisement Must be Followed by Candidates; Interference Will Open Pandora’s Box- Allahabad HC
Next articleEvery Child has Right to Know About Own parents and Spend Time with Them: Allahabad HC

Independent Application of Mind by Public Prosecutor is Mandatory For Detention Of Accused Beyond 180 Days U/S 36A(4) NDPS Act: Madras HC

UP Govt Should Manage Amrapali- Attorney General to the Supreme Court