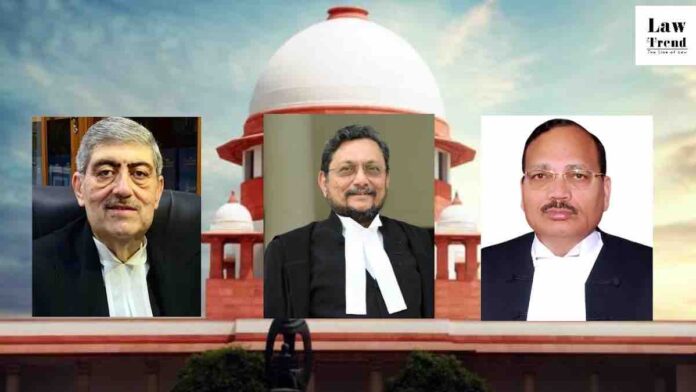 On Monday, the Supreme Court issued guidelines with respect to appointment of Ad-hoc Judges in the High Court under Article 224A of the Constitution of India.

The Order came from the bench comprising CJI SA Bobde, Justice SK Kaul and Justice Surya Kant in the case of Lok Prahari vs Union of India.

Lok Prahari, is an NGO, which approached the Supreme Court under Article 32 seeking appointment of Adhoc Judges under Article 224A for expeditious disposal of arrears of cases in High Courts.

The Court held that the ad-hoc appointment of Judges under Article 224A will not be a substitute of regular appointment. Also this appointment will not be against the regular vacancies. The salary of adhoc Judges shall be paid from the consolidated fund of India.

The Supreme Court has ruled that the Chief Justices of High Courts can start the process for appointment of retired High Court Judges as ad hoc judges to deal with pendency of very old cases relating to specific fields like criminal, civil, corporate etc.

Invoking the doctrine of “Continuous Mandamus” , the Supreme Court shall  monitor the working of the appointment of ad hoc judges under Article 224A of Constitution, resort to which is made for the first time.

The case will be next listed after four months. The Ministry of Law and Justice has been directed to file a report by then regarding the progress.

The Court has framed following Guidelines for appointment of Adhoc Judges:

i. Trigger Point for activation:

a. If the vacancies are more than 20% of the sanctioned strength.

b. The cases in a particular category are pending for over five years.

c. More than 10% of the backlog of pending cases are over five years old.

d. The percentage of the rate of disposal is lower than the institution of the cases either in a particular subject matter or generally in the Court.

e. Even if there are not many old cases pending, but depending on the jurisdiction, a situation of mounting arrears is likely to arise if the rate of disposal is consistently lower than the rate of filing over a period of a year or more

If recommendations have not been made for more than 20% of the regular vacancies then the trigger for recourse to Article 224A would not arise.

a. Past performance of recommendees in both quality and quantum of disposal of cases should be factored in for selection as the objective is to clear the backlog. b. The Chief Justice should prepare a panel of Judges and former Judges. Naturally this will be in respect of Judges on the anvil of retirement and normally Judges who have recently retired preferably within a period of one year. However, there can be situations where the Judge may have retired earlier but his expertise is required in a particular subject matter. There may also be a scenario where the Judge(s) may prefer to take some time off before embarking upon a second innings albeit a short one. In the preparation of panel, in order to take consent and take into account different factors, a personal interaction should be held with the Judge concerned by the Chief Justice of the High Court.

Para 24 of the MoP lays down a procedure for appointment under Article 224A of the Constitution.since the Judges are already appointed to the post through a warrant of appointment, the occasion to refer the matter to the IB or other agencies would not arise in such a case, which would itself shorten the time period.

v. Time to complete the process:

The requirement that recommendations should be made six months in advance by the Chief Justice of the High Court emanates from the concept that the said period should be required to complete the process in case of a regular appointment of a Judge under Article 217 or 224 of the Constitution of India. In view of number of aspects not required to be adverted to for appointment under Article 224A we are of the view that a period of about three months should be sufficient to process a recommendation and, thus, ideally a Chief Justice should start the process three months in advance for such appointment.

The tenure for which an ad hoc Judge is appointed may vary on the basis of the need but suffice to say that in order to give an element 34 of certainty and looking to the purpose for which they are appointed, generally the appointment should be for a period between two to three years.

We are also of the view that, at least, for the time being dependent on the strength of the High Court and the problem faced by the Court, the number of ad hoc Judges should be in the range of two to five in a High Court.

The primary objective being to deal with long pending arrears, the said objective will be subserved by assigning more than five year old cases to the ad hoc Judges so appointed. However, this would not impinge upon the discretion of the Chief Justice of the High Court, if exigencies so demand for any particular subject matter even to deal with the cases less than five years old, though the primary objective must be kept in mind

ix: Who Will Preside in Division Bench Sitting or Ad Hoc Judges

One of the issues raised was the constitution of Benches of an ad hoc Judge and sitting Judge in matters to be heard by Division Bench and as to who would preside. The Court held that the Division Bench, at present, may be constituted only of ad hoc Judges because these are old 35 cases which need to be taken up by them.

The Court also clarified that because of the very nature of the profile and work to be carried out by ad hoc Judges, it would not be permissible for an ad hoc Judge to perform any other legal work whether it be advisory, of arbitration or appearance.