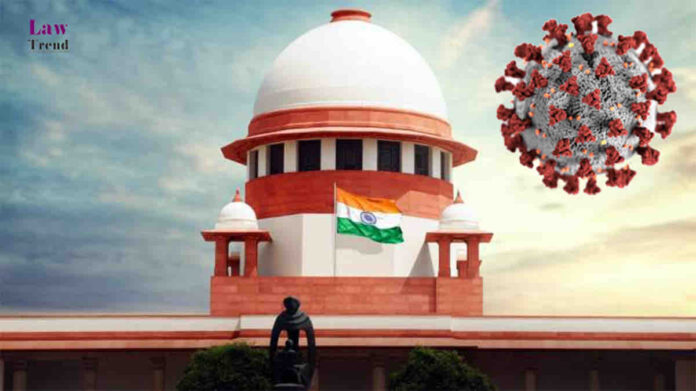 On CJI SA Bobde’s last working day, a bench headed by him expressed displeasure against the comment made by Senior Advocates regarding the suo motu case( related to Covid management ) that the Supreme Court has taken up.

The Bench stated that the Apex Court did not want to take the cases from High Courts; therefore, the criticism was unfounded.

Referring to statements made by the Senior Counsels, the Bench stated that they were not happy after reading the comments, but everyone has an opinion.

The Bench made these observations after Senior Advocate Harish Salve recused himself as Amicus Curiae.

The Solicitor General stated that there was a malign competition going on in media, and there was no need for such a thing when the country was going through a pandemic.

At this point, Hon’ble Justice L Nageswara Rao asked Senior Advocate Dushyant Dave that even before the order was released, it was criticised and if this the way Senior Counsels speak and impute motives?

Dave replied that he was not imputing any motives and further stated that he thought the Court might transfer cases and genuine perception.

However, Justice Bhat stated that the Court never said that cases would be transferred but asked the Centre to approach the High Courts.

Justice Rao further stated that senior lawyers should protect the institution. To this, Dave replied that institutions would be strengthened by objective criticism.

At this moment, the SG stated that the CJI was retiring today, and the CJI should get a loving farewell, and that senior counsel should not make a public statement based on perceptions.

Mr Dave retorted that he (SG) was defending the government based on perception.

SCBA President interjected that SG had stated that no migrants were on the road, and the Apex Court had accepted the statement. He further stated a shortage of oxygen in Delhi hospitals, and the Court should look into the issue.

The Bench replied that they were looking into this very issue.

The Bench adjourned the case, and it will now be taken up next Tuesday because the SG sought time to reply.

Lastly, the SG stated that he wanted the outgoing CJI to get a proper farewell and not abuse. To this, Dave replied that they were not abusing but were merely objecting to CJI’s statement.