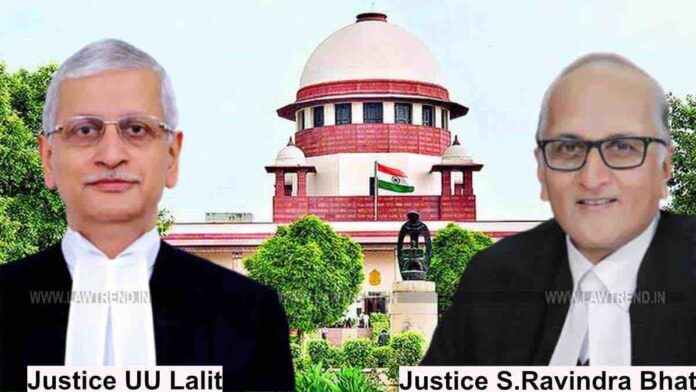 The Supreme Court recently ordered the reinstatement of a watchman who was wrongfully terminated from service in the year 2002.

The Bench of CJI UU Lalit and Justice S Ravindra Bhat further directed that the said watchman should be paid back wages from January 1 2020 to January 1 2022.

In this case, the petitioner (Jeetubha Khansangji Jadeja) was appointed as a watchman in 1992 by the Kutch district panchayat and he was terminated from service in December 2002 without any cause or notice and without following the procedure prescribed in the Industrial Disputes Act of 1947.

The petitioner challenged the retrenchment in the Bhuj Labour Court and was reinstated but without back wages.

The management moved the High Court where the Single Bench refused to interfere with the Labour Court order but in Appeal the Division Bench set aside the Labour Court and only awarded the petitioner a sum of Rs 1 lac.

At the outset, the court opined that the Division Bench should not have interfered with the labour court’s order and also that the petitioner-appellant had placed relevant documents showing that employees junior were retained..

The court further opined that the High Court should not have substituted the relief of reinstatement with a lump sum compensation.

The court also expressed displeasure at the management for dragging the case for more than 10 years and making the watchman suffer and ordered that the watchman should be paid back wages for two years and also restored the labour court’s order for continuity of service.

Share
Facebook
WhatsApp
Twitter
Print
Pinterest
Previous articleMere Non-Delivery of the Signed Copy of Award as contained in Sec31(5) Will Not Save Limitation: Chhattisgarh HC Upholds Dismissal of Sec 34 Petition
Next articleConcealment About Criminal Case is Valid Ground For Termination; Acquittal is Immaterial: Supreme Court

Under the SC/ST Act, an investigating officer must be appointed after considering his previous experience and sense of ability: Madras HC