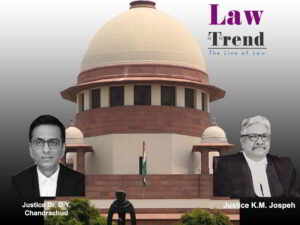 On 24.08.2020 a Division Bench of Supreme Court Comprising of Justice Dr. D.Y. Chandrachud and Jsutice K.M. Joseph, delivered a significant Judgment in the case of Wg. Cdr. Arifur Rahman Khan and Aleya Sultana and Ors. vs DLF Southern House Homes Private Ltd. ( Civil Appeal No. 6239 of 2019). This Appeal arose out of the decision of National Consumer Dispute Redressal Commission (NCDRC), whereby NCDRC dismissed a consumer complaint filed by 339 flat buyers, accepting the defence of DLF Southern Homes Pvt. Ltd. and Annabel Builders and Developers Pvt. Ltd. that there was no deficiency of service on their part in complying with their contractual obligations and, that despite a delay in handing over the possession of the residential flats, the purchasers were not entitled to compensation in excess of what was stipulated in the Apartment Buyers Agreement (ABA).

The complaint before the NCDRC was initially instituted by nine flat buyers. These nine complainants had booked residential flats in a project called Westend Heights at New Town, DLF, BTM Extension at Begu, Bengaluru. The project was being developed in an area admeasuring 27.5 acres and was to consist of 1980 units, spread across nineteen towers each consisting of a stilt and eighteen floors.

The primary grounds on which compensation have been sought before the NCDRC were:

The NCDRC, in the course of its judgment, observed that delay in the handing over of flats to the flat purchasers was admitted. While recording a finding of fact that there was an admitted delay on the part of the developer, the NCDRC held that the agreements provided compensation at the rate of Rs 5 per square foot of the super area for every month of delay. The NCDRC held that the flat purchasers who agreed to this stipulation in the agreements were not entitled to seek any amount in addition.

On the merits of the other grievances, the NCDRC has held that

Mr Prashant Bhushan, Counsel appearing for the consumers challenged the decision of NCDRC on following grounds:

We are clearly of the view that the jurisdiction of the consumer forum to award just and reasonable compensation as an incident of its power to direct the removal of a deficiency in service is not constrained by the terms of a rate which is prescribed in an unfair bargain.

In the present case, there exist, clear and valid reasons for not holding down the flat buying consumers merely to the entitlement to receive compensation at the rate of 5 per square foot per month in terms of clause 14 of the ABA:

For the above reasons we have come to the conclusion that the dismissal of the complaint by the NCDRC was erroneous. The flat buyers are entitled to compensation for delayed handing over of possession and for the failure of the developer to fulfil the representations made to flat buyers in regard to the provision of amenities. The reasoning of the NCDRC on these facets suffers from a clear perversity and patent errors of law which have been noticed in the earlier part of this judgment. Allowing the appeals in part, we set aside the impugned judgment and order of the NCDRC dated 2 July 2019 dismissing the consumer complaint. While doing so, we issue the following directions: