Object of Compassionate Appointment is to provide immediate succour to the family- Delay Fatal: Supreme Court 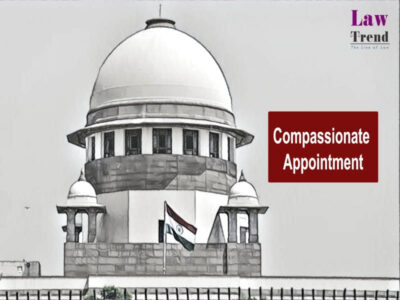 The Supreme Court has allowed an appeal filed by Central Coal Fields Limited challenging the Order of High Court to grant compassionate appointment to the son of a missing employee.

A Writ Petition was filed by Smr Parden Oraon seeking appointment of her son on compassionate grounds in the palace of her husband  (Operator helper) who was missing since 2002. Since the husband was missing the department dismissed him after issuing a charge sheet.

The lady approached the Jharkhand High Court challenging the decision of Coal India. A Single Judge of Jharkhand High Court considering the fact that the competent court has declared civil death of the husband, allowed the Writ Petition and the appeal filed by Coal India was dismissed. Feeling aggrieved an SLP was filed before the Supreme Court.

Counsel for the Respondent submitted that there is no provision barring compassionate appointment in case of civil death. Further immediately on completion of 7 years from 2002, when the husband went missing, the wife obtained the decree of civil death , therefore there is no delay.

In view of above the Supreme Court allowed the Appeal and set aside the High Court Judgment.