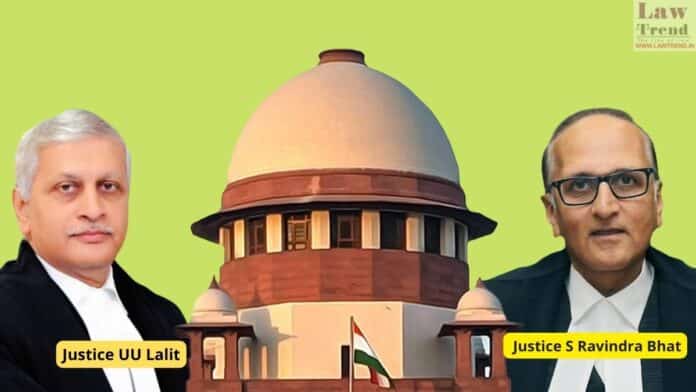 The Supreme Court on Monday ruled that leave encashment is part of the salary.

The bench of CJI Uday Umesh Lalit and Justice S. Ravindra Bhat was dealing with the appeal challenging the judgment passed by the Rajasthan HC where the application of the appellant seeking enforcement of the court’s previous judgment has been dismissed.

In this case, The appellants were appointed against sanctioned posts by the fourth respondent (a senior secondary school, established and controlled by the fifth respondent trust) in 1993. They continued to work uninterruptedly in that establishment on a regular basis.

In the meanwhile, the State had framed and brought into force the Rajasthan Voluntary Rural Education Service Rules, 2010 with the objective of providing security to the employees working in aided institutions, and to absorb them in the State’s service.

The State had, pursuant to the rules framed by it, absorbed other employees and teachers from aided institutions, but denied this benefit to the appellants.

By its final order, this court set aside the denial of absorption of the appellants.

Whether the order passed by the High Court is in accordance with the law or not?

The bench stated that Non-government educational institutions in Rajasthan are governed by the Rajasthan Non-Government Educational Institutions Act, 1989 and the rules framed.

Supreme Court observed that the appellants had to fight for their entitlements. The State initially refused them the benefit of regularization. Their petitions for relief were unsuccessful. Ultimately, this court, directed their regularization. The court even initiated suo motu contempt proceedings, after which the appellants were paid their salaries and arrears according to the recommendations of the Pay Commission.

The bench opined that Every employee had to furnish an undertaking in the prescribed form to accept the terms and conditions. Ordinarily, no public employer can be faulted in imposing pre-conditions before it recruits an employee. However, such conditions cannot be arbitrary, or so onerous as to be unconscionable.

Supreme Court relied upon the case of State of Rajasthan and Anr. v. Senior Higher Secondary School, Lachhmangarh and observed that leave encashment is part of salary.

The bench stated that “management establishment was recipient of 70% aid, in the form of grant. In these circumstances, the State cannot shrug its responsibility to shoulder its part of the responsibility to pay the appellants the share of leave encashment benefits, and hide behind either Rule 5 (viii) or the undertaking executed by them. The appellants are held entitled to privilege leave entitlement benefits. Such benefit shall be calculated from the date they entered the service of the establishment till the date of their absorption, by the State, in 2016. The State shall pay the benefits due to the extent of 70%, and the balance 30% shall be payable by the management establishment.”

In view of the above, the Supreme Court allowed the appeal.

Appointment Cannot Be Denied Merely Because The Candidate Was Tried For Offence u/s 498A IPC: Supreme Court