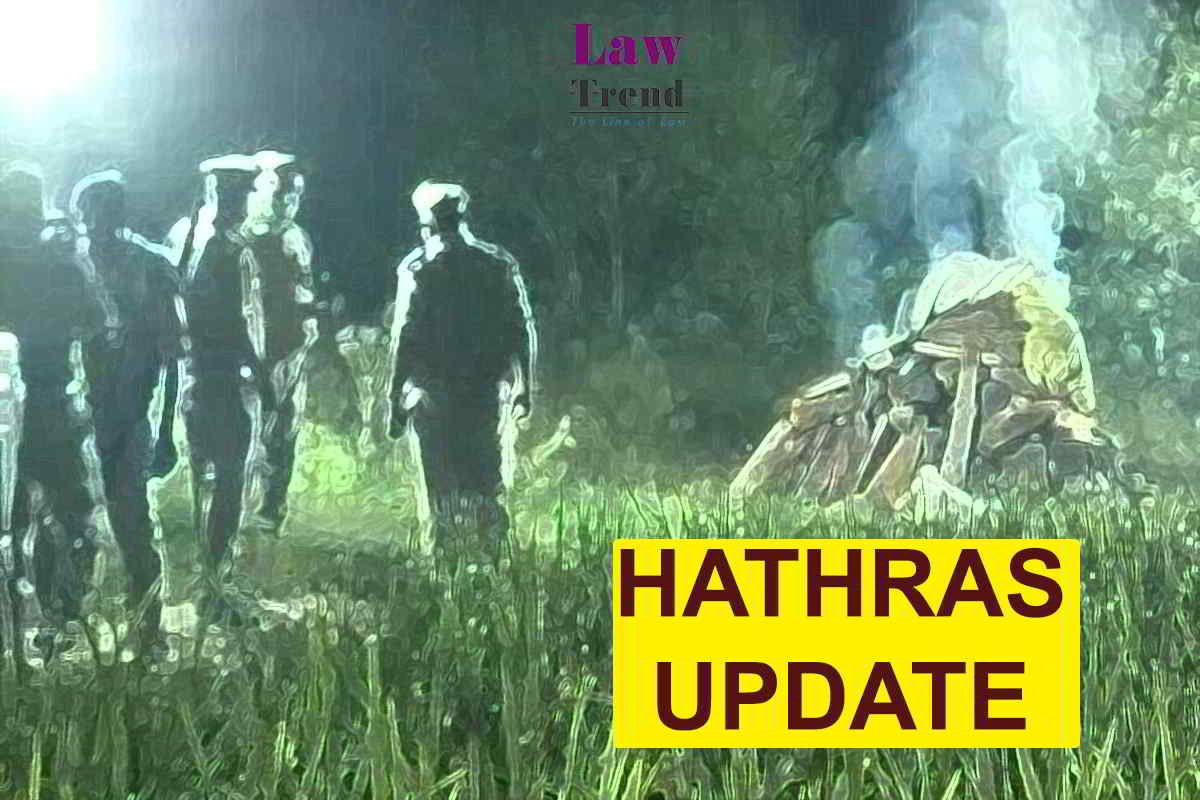 When the case was taken up Shri Sharad Bhatnagar, Counsel for the victim’s brother submitted that on 05.03.2021 an incident took place when PW-1 and PW-4 presented themselves before the Special Court at Hathras where Session Trial No.583/2020, Case Crime No. 0005/2020 is pending trial. Counsel invited attention to the affidavit of victim’s brother wherein it has been stated that on 05.03.2021 the aforesaid trial was listed before the Special Court, Hathras for recording prosecution evidence.

He further submitted that PW-1 and PW-4 had been summoned by the Court for the said purpose. The said PWs were accompanied by their counsel including Advocate Ms. Seema Kushwaha. Shortly after PW-1 began deposing before the learned Court of Sri B.D. Bharati, the Presiding Officer, Special Court (SC/ST Act), Hathras, an advocate named Tarun Hari Sharma, stormed into the court room and charged towards the applicant and the complainant counsel, shouting and issuing threats. Amongst the barrage of threats extended to the complainant Advocate Seema Kushwaha, he stated that in this case the complainant counsel could not represent the victim’s family.

It has been stated that when he aggressively approached them, it was evident that he was under the influence of alcohol. At the same time, a large mob, including lawyers, entered the courtroom and surrounded the applicant and the complainant’s counsel in order to threaten and intimidate them. In these circumstances, the learned Presiding Judge was forced to stop the trial proceedings. On being ordered to leave the courtroom, the aforesaid Advocate threatened the applicant and his counsel.

The affidavit further goes on to narrate the incident which took place thereafter. The affidavit also states that on account of this ruckus created by the aforesaid Advocate and mob which included lawyers and others, the P.Ws could not properly depose on account of fear for their life and security.

After sometime the proceedings were resumed when another Advocate namely Hari Sharma who, as alleged, is the father of Advocate Tarun Hari Sharma, entered the courtroom and he issued threats to the complainant’s counsel. In these circumstances, the Presiding Officer was forced to stop the proceedings.

Acknowledging the real and grave threat to the counsel for the applicant, the Presiding Judge, ordered the police personnel present in the courtroom to provide her security cover within the court premises. The Court also ordered the S.H.O. of P.S. Kotwali to provide safe and secure passage to the complainant counsel, Advocate Seema Kushwaha, and to drop her at the Hathras border. It is only then that the counsel was able to leave Hathras district court premises and thereafter she has been unable to appear before the concerned court due to the risk to her safety and security

In view of the aforesaid incident, the applicant prayed that a report be called from the learned Presiding Officer, Special Court, SC/ST Act, Hathras regarding the incident alleged to have taken place on 05.03.2021 and also, to stay the trial proceedings in the interregnum, given the real and grave risk of miscarriage of justice, till such report by the Presiding Officer is received.

the District Judge, Hathras to inquire as to whether any such incident as has been alleged in the affidavit dated 18.03.2021 occurred or not, on 05.03.2021, and send his report in this regard to this Court in a sealed cover. He shall also send a report of the learned Presiding Officer, Special Court, SC/ST Act who is trying Sessions Trial No. 583 of 2020 as to the incidents which may have taken place in his presence in the Court Room or outside. The District Judge shall before preparing such report go through CCTV Cameras, if any, installed in the court premises. The report shall be made available to the Senior Registrar of this Court at Lucknow within 15 days who in turn shall place it on record of these proceedings.

The Court also directed the Inspector General, C.R.P.F. Central Sector, Lucknow to collect information in this regard from his personnel who have been deputed for security of the victim’s family and who, in all probability, must have accompanied the family to the Trial Court, as to whether any such incident, as has been narrated in the affidavit dated 18.03.2021, referred herein above, took place in the Court premises. He shall submit his report along with a report of the concerned officer of CRPF who may have been present on the spot, in sealed cover, to the Senior Registrar of this Court within 15 days who shall place it on record.

After receipt of the aforesaid report,  the court will consider as to whether trial in question before the Special Judge, (SC/ST Act), Hathras is required to be stayed and is to be transferred elsewhere in exercise of powers under Section 407 Cr.P.C.

It has been further provided that till the next date of listing, the Trial Court shall conduct the proceedings in- camera in keeping with the letter and spirit of Section 327 Cr.P.C. and it shall adhere to this mandate strictly.

Court has also warned that:

if any person who is stranger to the trial as also anyone who may be involved in the trial, tries to disturb the proceedings before the Trial Court or in any manner attempts to threaten the life, liberty and property of the victim’s family and the witnesses, we would be taking severe action against such person including contempt proceedings under the Contempt of Court’s Act, 1971 read with Section 215 of the Constitution of India.