Highlights of Monsoon Session of the Parliament-25 Bills Passed 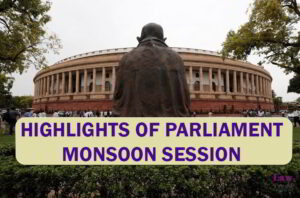 During this Pandemic Period, the Parliament conducted its Monsoon Session. Around 30 Member of Parliament and more staff have been found COVID-19 Positive during this session.

Parliament Monsoon Session of 2020 is one of the Shortest Session, but also one of the Most Productive, as 25 bills have been passed during this session.

The Session of Parliament was scheduled from 14 September to 1st October, but the Parliament could hold only 10 sessions.

Let’s have a glance at the Legislative Actions of the Parliament happened during this Monsoon Session.

A Rashtriya Raksha University is formed and is deemed an institute of national importance. The university will have various courses with a particular emphasis on correctional administration, criminal justice and policing.Read Here

Through this Bill, five Indian Institutes of Information Technology (IIITs) which are located in Agartala, Bhopal, Bhagalpur, Raichur and Surat are declared an institute of national importance.Read Here

As per this Bill, the National Forensic Science University is formed as an institute of National Importance. Read Here

Institute of Teaching and Research in Ayurveda Bill, 2020

According to this Bill, Institute of Teaching and Research in Ayurveda (ITRA) will be set up in Jamnagar, Gujrat and will be accorded the status of institute of National Importance. It will be the country’s first state of the art Ayurvedic institution. The Minister Incharge of the Ministry of Ayush shall be Chairman of the Institute. Read Here

The tenure of the Board of the governor has been extended for a year. This Bill replaces the Homoeopathy Central Council (Amendment) Ordinance, 2020.Read Here

According to this, a National Commission will set up whose job will be to regulate the practice and education of the Indian system of Medicine.Read Here

Under this Bill, a National Commission of Homoeopathy will be set up, and it will be responsible for homoeopathic practice and education in the country. This Bill repeals the Homoeopathy Central Council Act, 1973. Under this Act the Central Government shall constitute a council comprising, Chairman, seven ex-officio and 19 part-time members. Under the Act, the Central Government will constitute an Advisory Council for Homoeopathy. Through this platform, the State and Union Territories will submit their concerns before the commission and help in shaping the policy of education and training in Homoeopathy. Read Here

The main objective of this Bill is to encourage investments in the agricultural sector. As per the Bill, excessive interference from the government will be curtailed. It gives power to the central government to trade and control certain commodities. Cereals, pulses, oilseeds, edible oils, onion and potatoes have been removed from the list of essential commodities and can be regulated only in extraordinary circumstances.Read Here

Under this Bill, contract farming is encouraged. A buyer and farmer can get into an agreement about what will be produced or reared and about its price. For purposes of risk mitigation, the agreement can be linked to various credit schemes offered by the government and insurance companies. It will be the responsibility of the buyer to provide the equipment to the farmer. The minimum period of the agreement has been set as one crop per season, and one production cycle in case of livestock.Read Here

As per this Bill, the farmers will be allowed to trade their produce in different states and even to private individuals if they wish. This Bill gives freedom to farmers to farmers as the physical APMC markets do not bound them. A mechanism for dispute resolution is also established under this act.Read Here

Measures are taken to ease the process of doing business in India.

Taxation and Other Laws (Relaxation and Amendment of Certain Provisions) Bill, 2020

Tax benefits are provided to people who donate to the PM Cares Fund. Deadline for filing income tax returns was extended. The deadline to link Pan and Adhaar was also extended as per this Bill.Read Here

Under this Bill, fines payable for certain offences were reduced. It also removed penalties and imprisonment for some offences. Read Here

This Act aims to provide offsetting of financial claims between two parties into a net amount. Read Here

As per this Bill insolvency proceedings under sections 7, 9 and 10 cannot be initiated for another six months which can be extended to a period of one year.Read Here

This Bill aims to strengthen and streamline the provisions of Foreign Contribution (Regulation) Act, 2010. Under the new Bill the centre can allow an association or an NGO to surrender their FCRA certificate. Read Here

The main aim of this code is to consolidate 13 laws related to working conditions, safety and health of workers. Staffing firms will need only one license to hire people from different geographic areas. The threshold limit of contractor employees has been increased to 50 from 20. A migrant worker is also clearly defined in this Bill.Read Here

The threshold limit of the number of employees required for retrenchment and closing of the establishment without the approval of the government has been increased to 300; this will make it easier for employers who want to fire their staff. Under this Bill, the Industrial Disputes Act, 1947, Industrial Employment (Standing Orders) Act, 1946 and the Trade Unions Act, 1926 have been rationalised and subsumed.Read Here

Salary, Allowances and Pension of Members of Parliament (Amendment) Bill, 2020

As per this Bill, the salary of MPs has been reduced by 30% for one year. In order to reduce allowance and office expenses, some rules of the 1954 act have also been amended.Read Here

Under this Bill, various measures have been taken to prevent violence against health care workers. If somebody indulges in violence against a health care professional, then a fine ranging between Rs50000 to 1,00,000 will be imposed on him. The person can be jailed for a period of 3 months to 5 years as well. It also gives extra powers to the central government to prevent diseases like COVID-19.Read Here

As per this Bill, Aircraft Accidents Investigation Bureau, Bureau of Civil Aviation Security and the Directorate General of Civil Aviation which are regulatory bodies and fall under the purview of the Civil aviation ministry have been converted into statutory bodies.Read Here

Apart from Urdu and English, Hindi, Dogri and Kashmiri have been added to the list of official languages in J&K.