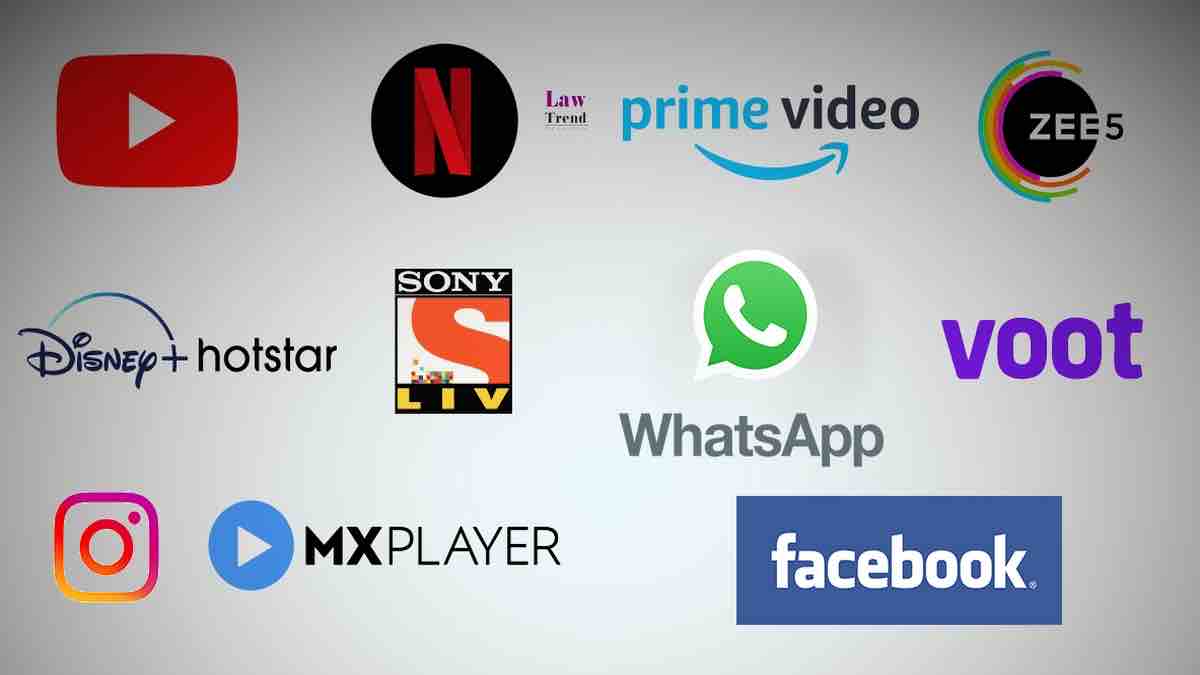 The Central Government on the 25th of February 2021 announced new guidelines for social media, OTT platforms, and digital news media. The guidelines were mainly issued to curb the misuse and abuse of social media platforms.

Significance of Social Media in India:

The extensive spread of mobile phones, the Internet, etc. has enabled many social media platforms to expand their footprints in India. The Digital India Movement has enabled Common Indians to express themselves on Virtual platforms. Since the introduction of smartphones, the use of technology has significantly increased in India.

The ministry of Information and technology has published the official number of users of the prominent social media platforms viz.:

Thus it is evident that the majority of the Indian population is using Social Media. The social media platforms have enabled common Indians to show their creativity, ask questions, be informed, and freely share their views, including criticism of the Government and its functionaries.

India is the world’s largest open Internet society and the Social Media Companies operating in India earn a huge chunk of profit from India.

The necessity of Regulating Social Media:

The prolific growth of social media in India, on one hand, has empowered the common citizens but on the other hand, has raised some serious concerns and consequences. In the recent past, some very disturbing developments are observed on social media platforms. The spread of fake news on social media has increased exponentially. Instances of the same have been seen in the lockdown period too. Fake messages used to circulate on Social Media platforms which resulted in multiple waves of panic in the common citizens. The spread of fake news is so persistent that social media companies have been compelled to create fact-check mechanisms.

Misuse of social media by criminals and anti-national elements for criminal activities has also increased in recent times. The criminal activities include inducement for recruitment of terrorists, circulation of obscene content, the spread of disharmony, financial frauds, incitement of violence, upsetting public order, etc.

The Supreme Court had also expressed its concern to regulate social media content through a suo-moto writ petition (Prajjawala case) vide order dated 11/12/2018. The Government of India was directed by the SC to frame necessary guidelines to eliminate child pornography, rape and gangrape imagery, videos, and sites in content hosting platforms and other applications.

In recent two-three years it has been seen that many Web Series and Movies have been in controversy over their content. Most recently web series like Tanda, Mirzapur etc have gone from District Court to Supreme Court to protect their writers, actors and creators from criminal action. Several FIRs were lodged in different parts of the country against the makers of web series, which shows that the resentment cause by any online content needs to be addressed by the Governemnt.

The methodology used to issue the guidelines:

The rules empower the ordinary users of social media platforms to seek redressal for their grievances and command accountability in case of infringement of their rights. Similarly, the rules also intend to curb the misuse of social media for criminal activities, spreading of fake news, financial frauds, child pornography and etc.

While finalizing these Rules, both the Ministries of Electronics and Information Technology and the Ministry of Information and Broadcasting undertook elaborate consultations among themselves in order to have a harmonious, soft-touch oversight mechanism in relation to social media platforms as well as digital media and OTT platforms.

The Ministry of Electronics and Information Technology (MEITY) prepared draft Rules and also invited public comments on them. MEITY received 171 comments from individuals, civil society, industry associations, and organizations. 80 counter comments to these comments were also received. These comments were analyzed in detail and an inter-ministerial meeting was also held and accordingly, the Rules have been drafted.

Social media companies will have to remove contentious content flagged by the government or court orders within 36 hours and take down posts depicting nudity or morphed photos within 24 hours of receiving a complaint, as per the latest intermediary rules.

Social media sites are the main source for the spread of fake news. First, a fake message originates somewhere on a social media site and then it spreads like a wildfire as users tend to forward such messages without checking their credibility. In such scenarios, it is very difficult to find that how the fake news started circulating on social media and the nuisance creating elements remain untracked. To tackle this, under the new guidelines it has been made obligatory on the social media platforms to disclose the first originator of the mischievous information that undermines the sovereignty of India, security of the state, or public order.

Further, the significant social media intermediaries have also been directed to publish a monthly compliance report and details of the contents removed proactively.

During the survey conducted by the MEITY, it was found that currently there is no robust complaint mechanism wherein the ordinary users of OTT platforms can register their complaint and get it redressed within a defined timeline. A lot of objectionable content is present on the OTT platforms which the users can find objectionable. But the users have no option to register a complaint against such content.

Taking this into consideration a three-level grievance redressal mechanism has been established for OTT players like Netflix, Amazon Prime Video, etc. Level 1 comprises the publisher which needs to employ a chief compliance officer, nodal contact person, and a resident grievance officer. All three officials will have to reside in India. They will have to publish a monthly compliance report and detailed contents removed proactively. There will be a Level II self-regulatory body which will be headed by a retired judge of the Supreme Court or of a high court, or a person of eminence from the relevant field, and can issue advisories to the publisher. There will be a 3rd level oversight body under the Ministry of Information and Broadcasting.

Guidelines for the Digital News Media:

With the advancement in technology, the form of news channels is drastically changing. In the past, the main source used to be newspapers. With the invention of television, digital news channels came into being as major news sources. But now in the internet era, television news channels are being replaced with digital news media. People prefer to get new updates about things around themselves from their mobile phones. It has become an easier as well as efficient form of the news channel. Thus regulating the digital news media was also necessary.

Thus the digital news websites have been directed to follow the Code of Ethics and three-tier grievance redressal mechanism. Publishers of news on digital media would be required to observe Norms of Journalistic Conduct of the Press Council of India and the Programme Code under the Cable Television Networks Regulation Act, providing a level-playing field between the offline news media (print, TV) and digital news media.

Challenge to the New Regulations:

Several Digital Media Houses and OTT Platform has challenged the constitutionality of the Regulations in the light of the Freedom of Speech guaranteed under Article 19 of the Constitution of India.

The problem of misuse of social media and digital platforms is an international problem. The Indian Government had been working on these rules for social media since 2018. The work however gained momentum weeks after a spat between the government and Twitter over certain messages around farmer protests that the government saw as inciting violence. The government sought removal of about 1,500 accounts and messages, a request that Twitter complied with, only after being warned of penal action.

It is the first time in India that such rules have framed for social media companies.

At the outset, the regulations seem to take a maximalist position by empowering the users of social media platforms but also curbing the misuse of the Digital platforms.

The social media companies have been given a period of 3 months from the issuance of the official gazette to comply with the new guidelines.

But another aspect is that most of the part of the new guidelines are self regulatory and there is no effective sanction behind it, therefore it can be said that its a Tiger without tooth. So the time will tell how effective these guidelines will be proved or whether time has come for Parliament to pass an exhaustive law on this issue and establish statutory authorities to regulate these players.

Edited and Conceptualised by: