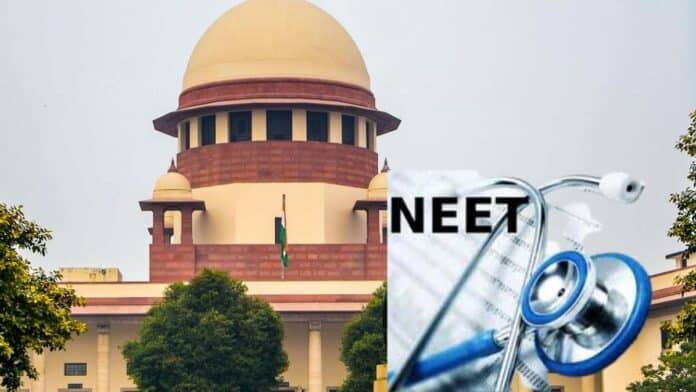 The Supreme Court reserved its decision on Thursday in the case of Neil Aurelio Nunes v. Union of India, in which the Central government introduced reservation for Other Backward Classes (OBC) and Economically Weaker Section (EWS) seats in State government medical institutions through the All-India Quota (AIQ).

Before reserving its verdict, a Bench of Justices DY Chandrachud and AS Bopanna stated that it must issue an order in the “national interest,” and NEET counselling must begin as a result.

During the hearing, the Central Government suggested that any revised criteria be made prospectively applicable, and that the current counselling and admission be held in accordance with the existing criteria.

The government also defended the OBC reservation and the criterion of 8 lakh income for determining EWS.

The Bench listened to the parties for a long time today before reserving its decision.

One of the issues the Court is looking into is the feasibility of having an 8 lakh cap on the EWS quota for PG medical admissions.

During the case’s hearing on October 25, the Central Government assured the Court that counselling for PG medical courses would not begin until the Court resolved the matter.

On November 25, the Central Government informed the Supreme Court that it intends to reconsider the criteria for determining EWS reservation. It then formed an expert committee to look into the matter.

Because of the case, the ongoing counselling process for NEET PG courses has been halted, prompting doctors in Delhi to protest against the government, demanding that the case be expedited and the counselling and admission process be completed as soon as possible.

The Centre informed the Supreme Court that the expert committee formed by the government to reassess the criteria recommended that the existing criteria be maintained for ongoing admissions, while the revised criteria proposed by the committee be implemented beginning with the next admission cycle.

Doctors’ protests also prompted the Centre to request an expedited hearing in the case, which resulted in the case being scheduled for this week.