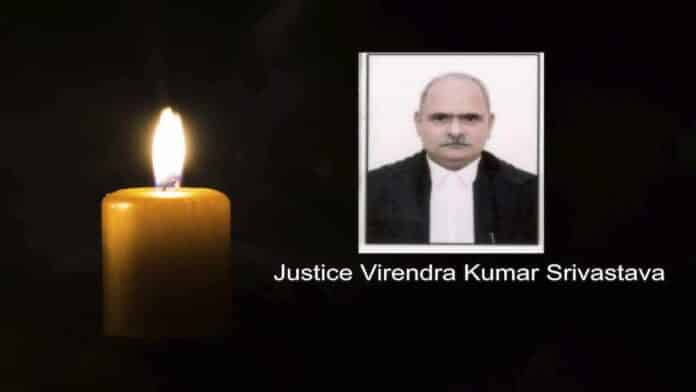 The Bench of Justice Siddharth Varma and Justice Ajith Kumar, observed that the records show that while Justice Srivastava was admitted to the hospital he was having fever for the last five days and breathlessness for one day with no comorbidity. The documents show that he was advised life saving drugs Remdesivir, however, the papers do not show whether actually he was administered Remdesiver or not on the first day and subsequent two days.

It was admitted by Sri S.V. Raju,Additional Solicitor General that there was no pulmonologist posted in Dr. Ram Manohar Lohia Institution of Science, Lucknow.

The Court found that there is no doubt that antiviral drug Remdesivir has shown quite in vetro activity against SARS-CoV-2 but the issue is whether in the absence of any advice and presence of pulmonologist who could have made assessment of requirement of Remdesivir to late Justice V.K. Srivastava, it could have been and whether he was administered with complete doses of Remdesivir.

Further the Court observed that it is also required to be known as to whether the injection was administered without putting a note to that effect in the medical file.

The Court recorded its Prima facie, opinion that since the records are not a complete guide in this case and page No.- 92 seems to have some interpolations besides being not very legible, the matter should be examined by a committee to be constituted by the Government.

To this Sri S.V. Raju,submitted that State has no objection in holding a fact finding enquiry into the medical treatment given to late Justice V.K. Srivastava at Dr. Ram Manohar Lohia Institute of Medical Sciences, Lucknow.

Accordingly, the Court directed as follows:

“The State Government to constitute a Committee that shall have a Secretary level officer as its convener with a senior Pulmonologist from SGPGI, Lucknow and a Senior Advocate to be nominated by the President/ Elders Committee of Awadh Bar Association as its members. The Senior Registrar of Lucknow Bench, shall coordinate with Government, SGPGI, 12 Lucknow and Awadh Bar Association in forming the Committee to conduct a fact finding enquiry into the treatment administered to late Justice V.K. Srivastava and submit the report to this Court within two weeks. The Committee shall be constituted within three days from today by the State Government.“